What is your favourite part of Imperial Assault? Not necessarily an easy question for me. But one of the things that I consistently find myself enjoying, is list building. There’s a strategy to crafting a great list that works well together. Some people enjoy taking a list that someone else has created and learning how to play and win with it. Everyone takes ideas from everyone else and that is how creative lists are born. Personally, a lot of joy in the game comes from winning with a figure or combination of figures that is unexpected. So I thought I would share some of my thoughts around list building and hope that they spark more creativity in the lists that are being played. Below is a link to the list builder I used for this article, Table Top Admiral. It will also show you the complete list that I will be discussing in the article. http://tabletopadmiral.com/imperialassault/0ed2bfb005883f3e68000000000000e9959e0b0b0f4977c7f317351c392b

What makes a good list? There are a few factors that I look at every time I sit down to look for a new list:

1. Trait synergy. The first thing I look at are deployments that have the same trait, or complimenting traits. The easy example of this is Hunter and Smuggler. There are a lot of cards that figures with both traits can play. So pairing those two traits together can make some great lists. My goal when I get creative is often to find 2 traits that have unexpected synergy. One example of this is Hunter and Brawler. There are a few figures that have both of those traits. So this might be the start of a list for me: 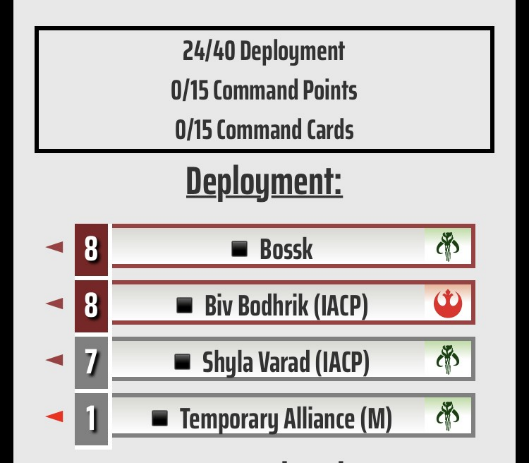 I could have included Trandoshan Hunters, but honestly, they’re not that good. Bossk is a little weak as well, and I am looking forward to when both of those deployments are fixed in future IACP seasons. Notice how I look across factions for shared traits. Temporary Alliance allows you to bring 2 deployments from the rebel faction. We’ll get into some more of how the synergy works when we talk about command cards.

2. Attackers vs Support. Now that I’ve picked a core of fighters I want to support that team. So I look at what they will need. A) Focus. B) Card Draw. C) Activation Count. Honestly, those of you who have been playing for a little while have probably heard of the Rebel Care Package (Gideon, C-3PO, and R2-D2). It’s a great example of supporting all of these things. There is a great way to bring all those Rebels into a Scum list, and I use variations of this a lot. 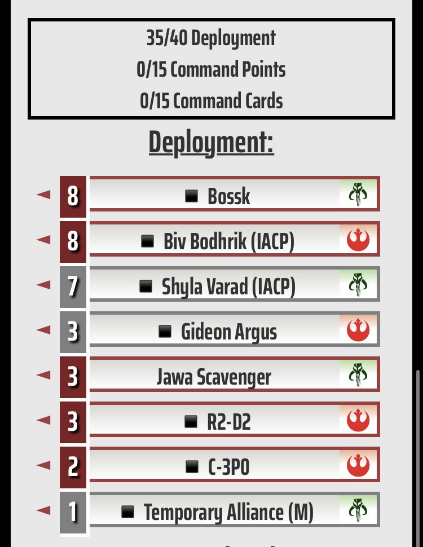 So I use a Jawa to bring in the 2 droids. Gideon and C-3PO provide the focus, and each have an extra support ability that is beneficial as well. R2-D2 provides the card draw for the list to get the sweet Command Card combos we want with this list. The Jawa may seem somewhat extraneous and only serve to bring other support units, but I think Jawas are one of the more underrated figures in the game. They are quite resilient and make decent objective runners. And with the Smuggler trait they synergize well with the Hunter trait. But the elite Jawa is also a Leader, which synergizes well with Gideon to play command cards like Planning. He also serves to bring the activation count up. I try to build my lists to between 7-9 activations (6-8 in Imperial). This list should get to 8 activations.

For more details about the importance of balancing support with attackers & activation count, watch this video by TVBoy:

3. Filling in the rest. At this point there is usually space for some type of hybrid support/attack unit, or a minor attacker who supports the main attackers. There are a few good options for this list. Typically I would look for a Hunter or a Brawler to fit the point value. With 5 points, there is not much in the way of Brawlers that I want, so I start looking at Hunters. There are Vinto and Greedo in Scum at 5 and 4 points and both could work. With Greedo you would have an extra point to spend on upgrades. The less obvious choice is BT-1. Because a Jawa can bring up to 3 droids from any faction, there is space to bring him over from Imperials. The main benefit that I see with BT-1 is that he self-focuses. This makes him a hybrid of attacker and support, because you don’t have to spend a focus that could go to a main attacker.

Now we are sitting at 40 points and are ready to start looking at command cards!

Hunters are pretty easy to choose command cards for. There are 3 main command cards I take 99% of the time with Hunters; Assassinate, Tools for the Job, and Heightened Reflexes. If I have the space I will bring Primary Target as well. I grab these first because I know I will want them regardless of what other command cards I find to fill the list. 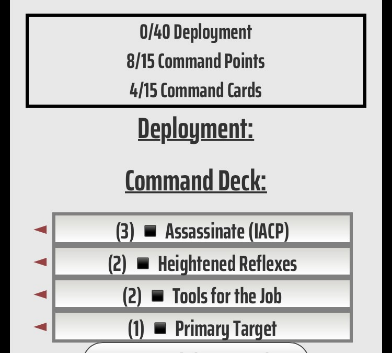 Next I will look at the Brawler trait. I particularly want to use the card Parting Blow and if I can I will try to squeeze in both copies. I also want Looking for a Fight, which you can play to initiate Parting Blow without your opponent choosing to move the figure. Shyla makes a great part of the synergy of this list. With her Mandalorian Whip she can also move hostile figures. If she moves them away from a space adjacent to another Brawler, that Brawler could play Parting Blow to attack the figure, before Shyla then also attacks the figure. Looking at the other Brawler cards, I also like Grisly Contest, Parry, and Face to Face. 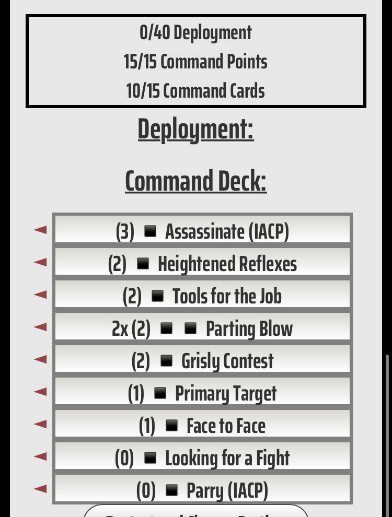 I have a few command cards I like to fit into most lists, if possible. These are: Negation, Take Initiative, Planning, Element of Surprise, Celebration, and Urgency. These have great utility in any list. 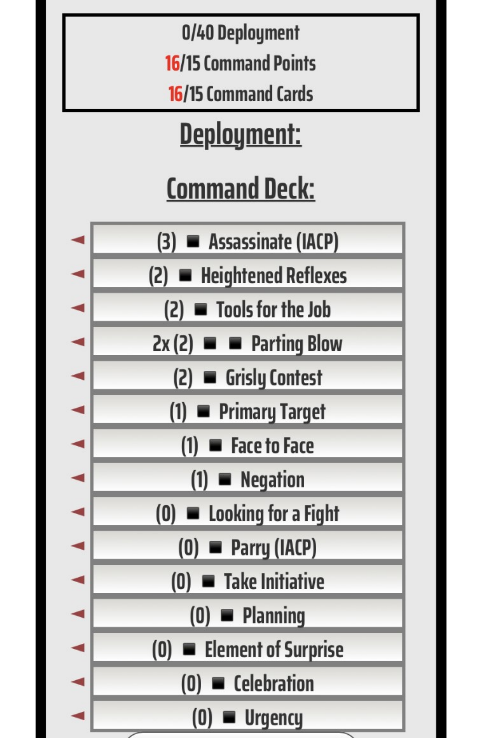 You’ll notice I have more than 15 cards and 15 points in the list at this point. That is deliberate. I try to find the cards I truly want, and then narrow them down by making difficult decisions about which cards to get rid of. This ensures that every card in my hand is one that I really want.

Because I really want Negation, I will narrow my choices down to Face to Face and Primary Target. Both can effectively be used by 3 figures. Technically BT-1 can also use Primary Target to add plus 1 to the damage results. Face to Face is a great Brawler card, but it’s especially great with Melee Brawlers, because the attack must be adjacent. Shyla, my only melee figure, often won’t use Face to Face, because her whip has a similar function and performs the job better. So in this case I would choose to drop Face to Face. If I were trying to build a Hunter/Brawler list in Imperials, focusing on Vader, I would make the opposite choice.

Looking over this command card deck, I review each card to see how many figures can use each card. My aim is for all my cards to be useable by at least 3 figures in my list, that way if some of them die before the card is drawn, I typically have a figure alive that can play it. My 1 exception is Planning. This is why I prefer 2 Leaders in my list, but I find it to be a powerful enough card that it’s worth taking, even if Gideon is the only Leader in your list. It helps that Gideon tends to hang back and support and lives for longer than most figures.

The last thing I will review is if there are any unique cards that I want to bring. This can be a tough decision, because if that figure dies then the card is useless. However, some are so powerful they are pretty much auto-includes in a list. There are 2 really great examples of this; IG-88, and MHD-19. Both of their cards are a significant part of why you choose them for a list, and I would not bring them without their card. Currently, I find Bossk and Biv to have cards worth looking at, but for the sake of simplicity, I will just say that they don’t do a better job of causing damage or supporting a figure, that I want to trade them for any cards in the list.

Hopefully this insight into how I build lists will inspire some of your own list building creativity. Don’t be afraid to try things that you are not sure will work. Keep your eyes peeled for another article or 2 on this topic, as I take a deep dive into some of the more difficult list building decisions, and show how I came to build my unique list that took me to the top 8 at the Home Worlds Vassal Tournament.