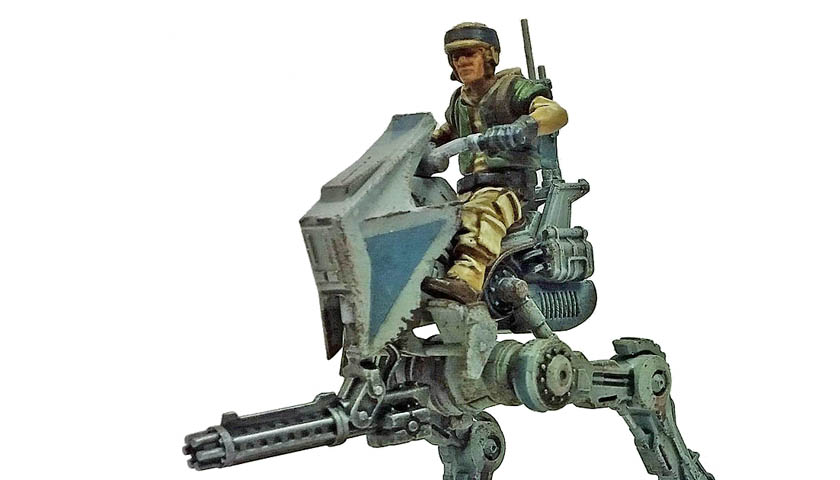 Hello, and welcome to another Season 4 spoiler! This is Jake. Today, we’re looking at my personal favorite addition to the Fourth Season of IACP: the Rebel AT-RT!

I played Legion during the heady days of Wave 1. I chose to play Rebels then for one reason: I really like AT-RTs. They were very fun to watch on the Clone Wars show, and I enjoyed playing them in the OG Battlefront II (2005). I won my local store’s initial Legion leagues on the backs of multiple AT-RTs (and Rebel Troopers firing miniguns, but that’s a whole other story). I was inspired to try to import my favorite unit into my favorite game: Imperial Assault.

We wanted to create a card that captured the speed and maneuverability from the AT-RTs in Clone Wars; a card that encourages a mobile, in your face play style while still being a viable addition to Rebel Trooper lists and enabling Rebel and Mercenary Vehicle lists (alongside Sabine Wren and Boba Fett). Vanguard allows the player to choose what dice they wish to use at close range (similar to IG-88), while Run and Gun encourages the AT-RT to keep moving toward the enemy for maximum firepower.

We wanted the AT-RT to fill a role as a mid-cost, powerful striker; a powerful role-player in Rebel Trooper lists. With an AT-RT to lead the charge, other Rebel Troopers like Fenn Signis and Echo Base Troopers, as well as their fellow Vehicle Sabine Wren, can move in behind your walkers to clean up the mess they make of your opponent’s front line.

While this combination for Trooper and Vehicle seems at first glance to be very similar to the Imperial Jet Troopers, the AT-RT plays very differently from their more agile brethren. The AT-RT is only a single figure with a 2×2 base, limiting its maneuverability, and does not have easy access to evades like the Jets. Therefore, it is not as effective at grabbing and holding objectives. To make up for this, the AT-RT is capable of dealing much more damage than a single Fly-By attack from a Jet Trooper, making it much more effective against figures with innate defense bonuses or two defense dice.

With access to suite of powerful command cards and trait synergy with many fun figures, the Steering Committee expects the AT-RT to be a powerful addition to the Rebel faction. However, it does not easily fit into the Hero Box, Han Rangers, or Jedi archetypes commonly seen in the Rebel Alliance. Instead, the AT-RT blazes its own trail, leading the assault against the evil Empire from the front lines and clearing the way for its comrades to exploit the breach. We look forward to seeing the AT-RT in action in Season 4 of the Imperial Assault Continuity Project!

This article is part of our Season 4 Preview series. All through July, the Steering Committee will be revealing the new cards from Season 4! You can discuss these cards in the comments here or on the IACP subreddit.