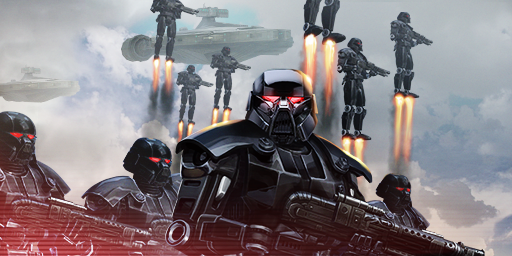 Welcome to another spoiler of Season 6 content from IACP! Introduced to us in Season 2 of the Mandalorian, the Dark Trooper Mk III was an intimidating foe that was flexible, tough, and strong. We are pleased to announce this addition to the imperial barracks. Check out the brand new deployment card and speculate how they may strengthen your army.

If the Mandalorian showed us anything, it’s that a single Dark Trooper can do a lot of damage, and is really tough too. We decided the best way to balance this was to make single figure deployments. At 10 Health they are quite beefy and require a concentrated effort to take down. With their Advanced Targeting Computer, the Dark Troopers are continually focused and consistently produce damage. We also thought a great way to show case their strength was to have them be able to push other figures. Durasteel Fist show cases their ability to engage in close combat and dominate those around them. It also allows them to punch through a door, just like the show!

One of the signatures of the Dark Trooper is their ability to fly with their jet boots. However, using a jet pack seemed a deliberate action and didn’t seem to just fit adding the Mobile ability to their card. Instead, we gave them the Lift Off ability, which gives them the ability to control a lot of area, and cross sections of the map that you normally couldn’t access.

I was one of the people play testing these guys during the design phase and I think you’ll really enjoy playing them. They pair well with Death Troopers for Field Tactics, which seems appropriate as Death Troopers and Dark Troopers both appear in the show working under Moff Gideon. They hit really hard, which is why we made them auto-focus, so they wouldn’t hit too hard when you hack these guys with a Jawa and run them with an IG droid or 2!

One of the other things we have been trying to do is give some of the old FFG command cards new life. This season, we want you to check out Expose Weakness. This card has always seemed to be a great idea at first glance, but the cost of an action usually meant it was cut from every deck I’ve ever built. Let’s see how hard (or easy) it is to expose your opponent’s weakness when it is more efficient. I’m hoping this becomes an anti-Queen piece card, helping take down strong defences with even the weaker attacks.

I’m hoping that you are enjoying the spoilers that are coming out and are getting excited to play some Imperial Assault with new figures and cards. Hold onto your helmets, because we have more spoilers coming next week!