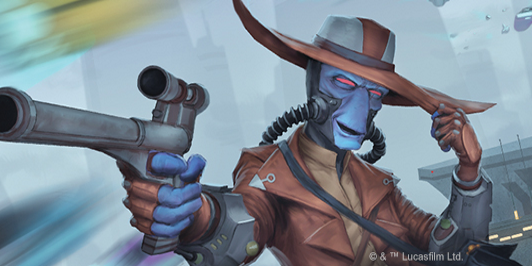 Today we wrap up our series of Season 7 spoilers with three brand new unique figures who have been hiding around the Star Wars universe and are finally being brought out into the light, along with the first neutral Skirmish Upgrade introduced in IACP since Suppressive Fire debuted in Season 2.

I’ll Take On Any Job… For the Right Price

We open with the old gunman, the only Duros with a faster trigger-finger than Fett himself, notorious bounty hunter, Cad Bane. Armed with an array of lethal armaments and his trusty jet boots, the savvy scoundrel is not only a proven mercenary in his own right, but also a cunning leader of his fellow bounty hunters.

Cad Bane complements Tuesday’s Hired Guns preview as another new option for a deployment cost in which the Scum faction has been sorely lacking before this season. And Bane makes a powerful addition to any Scum list, especially one with other Hunters for him to maneuver into position with his second ability, I Make the Rules Now. In a faction that lacks for mobility tools, this ability can be used at the start of any other figure’s activation to move one of Bane’s nearby allies one space, potentially giving that extra push necessary for a fellow hunter to get in an attack, or even disrupting line of sight for an incoming attack. He can even use that ability to move Jabba one space out of the deployment zone to sit on a nearby terminal during round 1 on maps like Mos Eisley Back Alleys. Cad Bane will reward the quick-witted player who can make the most of this versatile ability.

But let’s not overlook his first ability, Flawless Execution. Whenever you think you’ve got the drop on Bane, he’s got another trick up his sleeve. If a Cad Bane player does nothing else, this ability functions like any other “auto-focus” ability, such as BT-1’s Assassin or Zuckuss’s Mystic Hunter, meaning he attacks with a red-green-green dice pool. But unlike those figures, if you do choose to focus Cad Bane, by means such as Jabba the Hutt’s Incentivize or C-3P0’s Inform, then you still get value out of that choice. Bane doesn’t gain a fourth die when he attacks while “pre-focused”, but instead can convert the green die to a die of any color, as well as gaining a power token, which he could then choose to spend on this attack! You might see a pre-focused Bane attack with a red-green-blue attack with a damage token added, or you might see an injured Bane rolling red-green-yellow and grabbing an evade token, in hopes of rolling a surge for recover and using that token to survive another round. This ability opens up options for you, the player, to utilize Bane the way you believe best serves your needs. Because if there’s anyone Cad Bane’s looking out for, it’s number one.

Cad Bane didn’t live to be as old as he has in his line of work by being predictable. With a quick draw beyond compare, and an ability to stay three steps ahead of the sharpest minds in the galaxy, he’s always hitting his enemies where they least expect it. With his unique command card, Still Faster than You, you can disrupt your opponent’s plans by taking out a key figure that your opponent has neglected to activate, hopefully removing them from the equation before they can foil your nefarious plans.

This Power is Beyond Your Control!

Speaking of ‘nefarious’, there’s something sinister hiding in the swamps of the planet Dathomir. The body of Taron Malicos may have survived the horrors of Order 66, but his mind has fallen to madness. He has taken refuge on the graveyard planet of the Nightsisters, and wields their fell sorcery to his insidious ends. A major villain of the video game Star Wars: Fallen Order, Taron Malicos is a Jedi Master that fell to the dark side in the events following the extinction of the Jedi Order.

One of the most decorated Jedi Generals of the Clone Wars, Taron Malicos was once a great leader of men. Now, he exerts his influence to bend the will of what remains of the Nightbrothers and Nightsisters, and tempts any prospective student into following his path into insanity. Under the tutelage of this Fallen Master, any Force User can come to understand the power of the dark side!

But Malicos has dwelled too long on the Nightsisters’ planet, and his hatred has driven him to Madness. A madness which fuels him in his most desperate moments, and drives him to turn disadvantage into strength. This ability rewards an aggressive playstyle. If you are one to hide in your deployment zone and collect a hand of 12 command cards before finally wading into the fight, Taron Malicos will encourage you to take a different tack.

The one fragment of the old Master that has not dwindled in his time on the blood-red planet is Taron’s raw power. With an impressive command of the Force, he is capable of tearing whole tombs down around his enemies. It is nothing for him to assault them with a Boulder Barrage, which he can use both as a long-range offensive weapon, including finishing off fleeing enemies, but also as strategic battlefield control, by leaving the debris from his salvo blocking a key path for his foes.

Through the dark magicks taught to him by the Nightsisters, Taron Malico has accessed Forbidden Knowledge, which he can use to perform impressive feats, unachievable by even the most powerful Jedi. But this power comes with a price, one which drives him further into the throes of Madness.

Save the Rebellion! Save the Dream!

In a gallery of old men driven into hiding, Saw may have gotten the worst of it. While we honor the spirit of his Rogue One appearance, we have chosen to present Saw Gerrera in the more battle-ready state in which he appears in such titles as The Bad Batch and Star Wars: Fallen Order. This Saw Gerrera is a firebrand rebel, too extreme for even the burgeoning Rebel High Command.

Saw Gerrera came up fighting a Separatist occupation on his home planet of Onderon (yes, that’s Saw in that episode of Clone Wars! Before he was ever in Rogue One!), and if there’s one thing he learned fighting the clankers, it was that standing in straight lines in a battle is a great way to get yourself killed.

His Brutal Tactics leave onlookers awestruck and uncertain whether opposing him is truly worth the losses they will suffer at his hands. Where Saw’s Partisans go, Wanton Destruction follows. Each of these unique abilities modifies your entire army’s attacks, regardless of their proximity to Saw.

Saw’s Partisans have innovated in methods of Guerilla Warfare, and it is not uncommon to find his agents spread out among the populace so that they can’t easily be pinned down together. Each of his soldiers have learned how to fend for themselves, and use the battlefield to their collective advantage when they approach from unorthodox angles.

If Hera Syndulla is Imperial Assault’s quintessential “box” Leader, then Saw is just the opposite. With map-wide innate abilities that punish the opponent for boxing up and a unique command card that incentivizes his own squad to spread out, Saw is a master of unconventional tactics, which makes playing a Saw list feel like nothing else in the game. Deploy Saw Gerrera onto the battlefield, and wreak havoc on your opponent’s forces with this ruthless rebel Leader!

Get Below and Stay There

Sometimes, when you live life in the Outer Rim, you maybe have to haul some goods that it might be better if the Empire didn’t know you had on board. That might make you a Smuggler, or you might just call yourself an enterprising individual. Regardless, sometimes, there are some things that you’d rather prying eyes not get a good hard look at.

If you’re like Saw Gerrera above, you may have a particular dislike for spies, and if so, then a Smuggling Compartment is just what you’re looking for. If you’ve got valuable command cards in your list that you’d rather not fall prey to any Strategic Shifts or Intelligence Leaks, or even the Mockeries of a Headhunter HK-47, then you might want to spare a deployment point for this skirmish upgrade, which will allow you to set aside your most valuable cards until after such effects have resolved, letting you keep the best hidden away for yourself.

Always in Motion is the Future

With that final addition, we have nothing left hidden up our sleeves. You may have been expecting certain characters to show up in this article, like a certain Jedi of a Fallen Order. But we want to make sure we’re getting out our best content first, and these are the figures we felt were ready for prime time. But trust when I say, if there’s a deployment you think is missing, we almost certainly have ideas. Ideas that might be fully formed as soon as the next season. But as for Season 7, it is entirely revealed! Playtesting League will be fired up shortly, so be looking for a post to go up about that, but in the meantime, the season goes live as of Monday, April 25th. I hope you enjoy the new additions to the IACP. Let us know what you think, whether on the IACP Discord, IACP Facebook, or Zion’s Finest Slack Channel. May the force be with you!