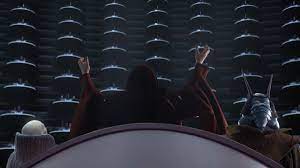 Hello everyone! I know that we just recently announced the Season 5.2 changes and a new map rotation, but I’m coming at you today with even bigger news:

The Steering Committee will be reorganized into the FIRST! GAME DESIGN! EMPIRE!

That’s right, I’ve fired all the other Steering Committee members. It has been fun to work with them, but I’m afraid we’ve reached the pinnacle of what IACP is capable of with such a large team. Now, it’s just you and me, IACP community 😉

To cement my new reign, I am pleased to announce that I will be fulfilling all of the greatest community requests in the soon-to-release Season 6. Here are your first previews:

Easily the second-most requested new figure in IACP (besides Ewoks) has been Jar Jar Binks. I am proud to show off Representative Binks in all his too-lucky-for-his-own-good glory. Speaking of, his Dumb Luck ability allows him to enhance his own attacks and force opponents to try again. Additionally, Delusions of Competence brings in another change everyone was clamoring for: making dodges better. Now instead of merely frustrating all of your opponent’s dreams, the trusty X-Man will also help kill his figures! Finally, Bombad General will act as powerful cohesive force for all the other Gungan figures coming out in Season 6. I’ll be spoiling them later…

Another frequent request I’ve received is to make a card for what is widely considered to be the coolest and most believable scene in Star Wars history. You’ve asked, and I’ve answered! With Stellar Flight, your Rebel Leia will be upgraded to a way cooler Resistance Leia, with awesome flying action! All you need to do is get your Rebel Leia struck down (preferably by her own son) to make her more powerful than you can ever imagine.

Only This Blade Tells

Speaking of the Sequel Trilogy, our Imperial reveal for this preview article is none other than C-3PO (Holder of Ancient Secrets)! Everyone’s favorite droid is getting an upgrade because he refused to shut down with his Forbidden Knowledge. This intimidating droid has the ability to perform an Ancient Ritual. In true Sith fashion, this ritual unlocks great power… at a cost. Another way to access great power is to use your Forbidden Knowledge to inform your allies of the ancient Sith secrets that will help them win. I look forward to seeing C-3PO and 0-0-0 team up for wonderful protocol droid hijinks…

The most frequent request I’ve gotten since day one at IACP has been the constant flow of requests to make Onar Koma worth his 6 points. I’m pleased to announce that Season 6’s flagship new card is an elite deployment card for everyone’s favorite Aqualish. With his Supercharge ability, Onar will no longer be restricted to moving only small figures, and he gets an attack out the deal. Additionally, he will not be held back in the attack front anymore as the Assault ability allows him to perform ANOTHER attack after a Supercharge. Finally, his Unleashed ability will make your opponents think twice about attacking him. These new abilities, combined with slight increases to his basic stats, will allow the beleaguered Onar to finally have his time in the sun.

A Legacy of Drama Queens

The final card I have to preview today is a Command Card that finally unites Darth Vader and Luke Skywalker on their greatest shared trait: a love of being overly dramatic when cutting down swarms of enemies. With Hallway Scene, you will be able to replay the most memorable scenes of Rogue One and the Season 2 Finale of The Mandalorian on your Imperial Assault tables! While some may be worried that this could cause a Negative Play Experience, I am confident that the sheer awesomeness of this card will make anyone it is used against thankful to have seen it in action.

That concludes this preview of Season 6. As I said at the beginning of this article, I look foward to having a much closer relationship with the community now that the pesky other members of the Steering Committee are out of the way. If you want to send me adoring fan mail, you can reach me in the usual places: Slack, Facebook, and Discord. Until next time, I leave with you one final message:

One thought on “This is the (New) Way”